The first ever hybrid Latitude59 – how did we do it?

Like many other events, Latitude59 was also forced to rethink its format and took place on 27 and 28 August instead of its usual end-of-May dates. With a lot of hard work and – dare we say – with some luck, we managed to put it on as a hybrid event, meaning that attendees were present both online and on-site in Tallinn. Latitude59 attracted almost 2000 participants from 55 countries and to the best of our knowledge, it was the first hybrid tech event on such a scale to take place in the region, perhaps even in the whole of Europe.

Latitude59 has always been a very international event, attracting investors, startups and speakers from all over the world. In the months following the initial decision to postpone, we realised that our plans to organise the usual 2500-people event weren’t just viable. For a time we did consider going fully online – as many other events successfully have. However, after having organised and attended many online events ourselves, we saw that the real potential lies in bringing the online and physical together, safely. We had three months to build something that had never been done before.

Initially, the concept of a hybrid event was quite foreign and we had to constantly educate our audience and partners that no, we didn’t suddenly start building hybrid cars, and yes, the event is actually taking place physically as well as online. While preparing the hybrid event, we were also ready to pivot to online-only in a moment’s notice, should the circumstances worsen. In essence, we were working on two events at once. We were also lucky that the COVID-19 situation in Estonia and its neighbouring countries remained under control for most of the summer and allowed us to make plans for the physical event.

From the get-go, we decided that this year’s focus was going to be on startups and investors even more than usual. Securing speakers in such circumstances however was no easy task. We didn’t entertain any illusions that we could host our usual 100+ speakers from all over the world in Tallinn and began working on an agenda concept that included our most popular programme elements. Founder stories, Best of the Baltic States showcase and Investor reverse pitch all made the cut, as well as some additional sessions that focused on the challenges that both startups and investors are facing right now.

We were also fairly adamant that while speakers could be present via video calls, someone always had to be on the stage in Kultuurikatel as well, creating a truly hybrid experience. That way we were able to host pitches from the Belorussian startup community, hear from different Swedish funds about investing in innovation and even had two sessions with our partners from Japan. We did have some online-only events as well, such as the Mastercard Lighthouse programme demo day with 18 fintech and impact startup pitches, which we also broadcasted on the additional screens at Kultuurikatel. 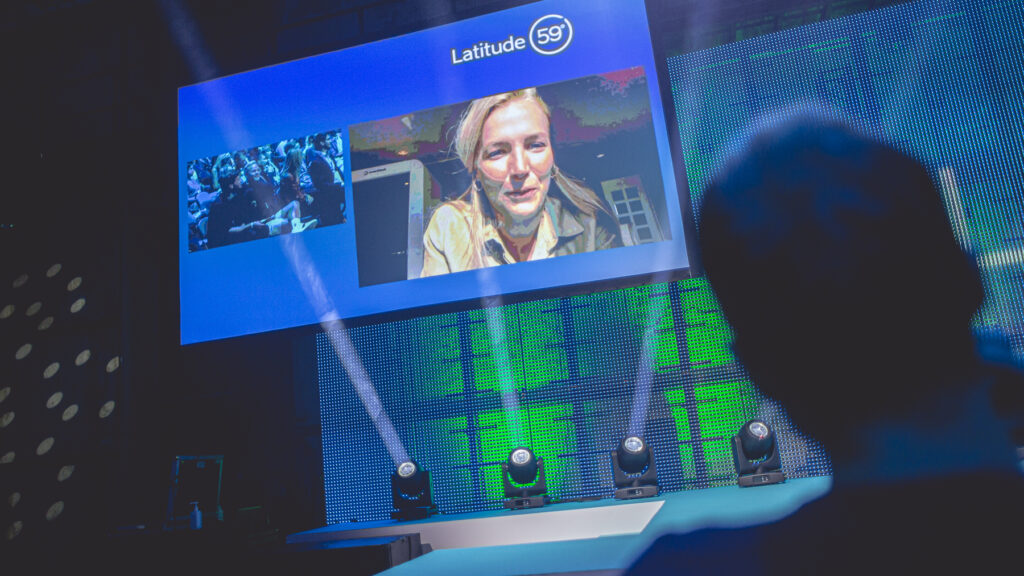 One of the most popular parts of Latitude59 has always been our startup demo area with a lot of hustle and bustle and human contact. In these current circumstances, it was pretty clear that hosting the startup demo area in its usual format would be a health risk. Thus the decision to move the area fully online to our digital event app Talque was born. Together with our partners from Tehnopol Startup Incubator, we hosted a virtual demo area where Tehnopol streamed interviews and discussions with some of the most promising startups as well as experts, investors, and community members.

Another first for Latitude59 was the mentor programme, aimed specifically at startups. The programme brought together 67 worldwide experts advising on a host of topics, including Mick Halsband from Lunar Ventures, James Isilay from Cognism, Cristina Fonseca from Talkdesk and Indico Capital, and Taavet Hinrikus from TransferWise. In the end, some 160 startups from all over the world took part and while there were definitely some glitches on the way, we’ve been receiving overwhelmingly positive feedback about the programme. Jeff App for example dubbed our mentoring sessions as “probably /…/ the best mentoring experience to date for us at Jeff App. World-class mentors providing advice based on cold, hard truth.”

The mentoring sessions are something that we’re definitely taking with us to the upcoming editions, albeit with a little more refined process.

Over the years we’ve worked hard to make Latitude59 a must-attend event in the calendars of international investors and have seen a year-on-year increase in the interest towards the region. With more than 70 VC funds in attendance (both online and on-site) and a total of 325 investors from 32 countries, we can safely say that the hard work is beginning to pay off. The Investor Breakfast co-hosted by Invest Estonia was streamed to all investors attending online too – we’re just gutted that we couldn’t offer actual food to the online participants.

However, one of our key challenges in putting on a hybrid event was to ensure that those who attended online could interact with the physical attendees. To allow this we decided to open our digital event app for video calls for the whole week and were extremely glad to see many calls happening onsite as well. 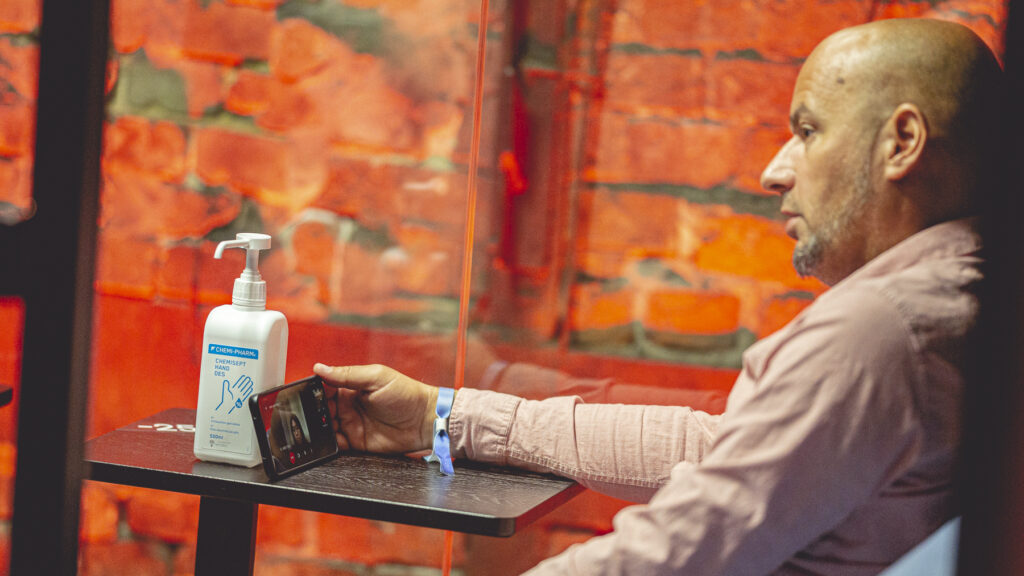 One of the highlights of Latitude59 has always been the pitching competition. This year we decided to put a little spin on our usual practices and hosted the first ever Latitude59 pitching competition online pre-finals at the beginning of August. Five days, 50 teams, 11 jury members. From there 10 teams went on to the Startup Wise Guys boot camp and to pitch in front of the Estonian Business Angels Network EstBAN investor committee. Five teams made it to the Latitude59 main stage with Adact and ATOM Mobility both winning the 200 000 EUR syndicate investment from EstBAN, and ATOM also bagging the 10 000 EUR cash prize from Latitude59.

In addition to the main pitching competition, numerous other competitions and showcases took place with almost 90 pitches being delivered over the two days.

Physical event – what precautions did we take

One of the aspects that were constantly on our minds was guaranteeing the safety of all the on-site attendees. As mentioned, Estonia was one of the few countries with relatively low infection rates throughout the summer. Nevertheless, putting on an event with almost 1000 physical attendees, some of them travelling from abroad during a global pandemic, comes with a host of risks. In addition to having fewer people at the venue than usual, we also provided an ample amount of disinfectant, constantly aired the main conference halls and – together with our partners from Invest Estonia – made sure that participants had access to face masks. Attendees were asked to fill in a self-assessment questionnaire – more for the psychological effect than anything else. We also had a doctor on call and a medic available on-premises. In these circumstances, there is no such thing as over-communicating and we were really glad to hear about responsible participants who despite having an on-site ticket decided to participate online when feeling a little under the weather. 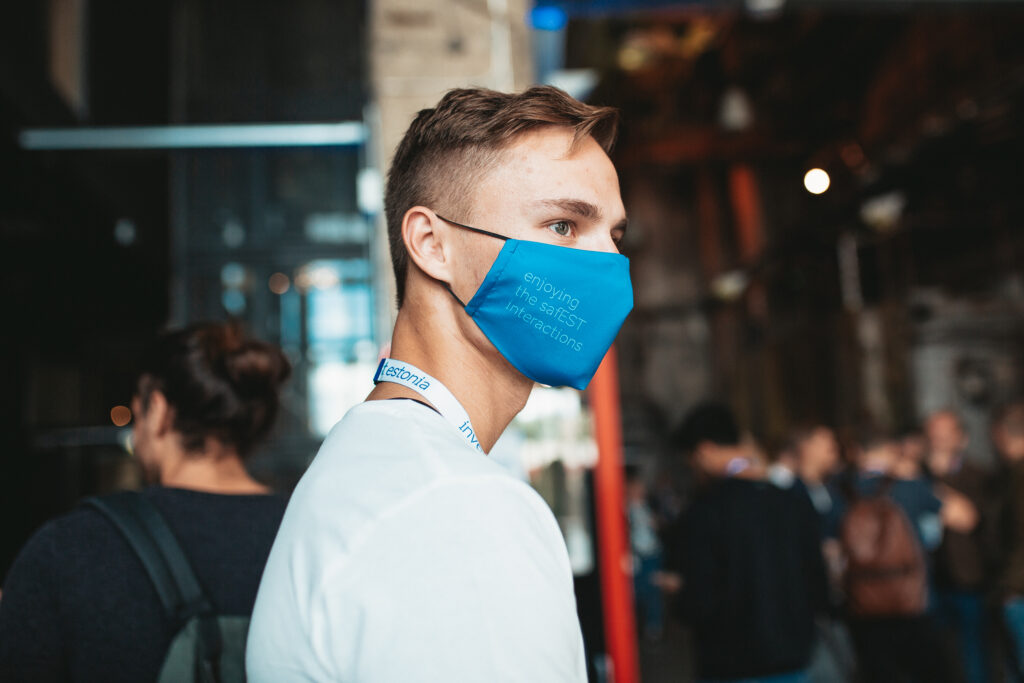 The continuous changes to the 2020 edition of Latitude59 forced us to refine our position in the market even further. As a strategy we focused on finding participants who would sure bring value to each other. Even though the overall attendance numbers were lower, keeping the focus on finding relevant attendees helped us to deliver on our promises. What about the international audiences? We chose our target countries based on what we know have existing relationships with Estonia and Latitude59 or to put it simple – could travel here. Our outreach to sell online tickets focused on the countries with an active startup and/or investor scene. We will continue to flourish these relationships to hopefully have all our online participants one day present at Latitude59 in Tallinn.

In conclusion, this event wouldn’t have been possible without the support of the vibrant Estonian startup community and all the partners and sponsors of Latitude59. Many of the elements tested at the first ever hybrid Latitude59 will definitely make their way to the future editions as well. The next Latitude59 is set to take place on 27 and 28 May 2021 with super early bird tickets now on sale at latitude59.ee/tickets

Latitude59 is back – join us to celebrate 10 years of the flagship startup and tech conference! 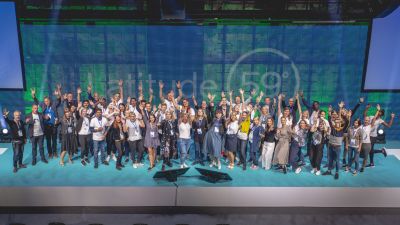 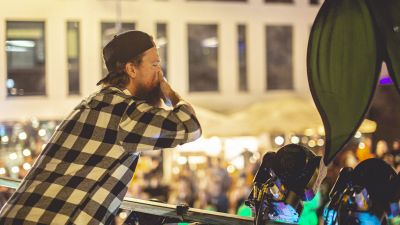 Latitude59 reschedules and returns in 2022. 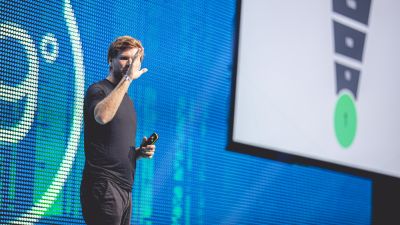 Latitude59 is back – join us to celebrate 10 years of the flagship startup and tech conference!

Latitude59 reschedules and returns in 2022.